There are limits to the human endurance. But what role does our brain play in it? As Alex Hutchinson, a Canadian scientist and journalist for renowned American magazines, will tell us in this interview: a big one!

Alex Hutchinson is himself an experienced runner and regularly publishes articles in the well-known endurance magazine Outside (after several years of writing for Runner’s World), where he covers a wide range of topics in the field of endurance sports. In his book Endure, he looks into the limits of human endurance performance and investigates influencing factors. According to Hutchinson, the role which our brain has in this is underestimated, while it is actually able to influence our performance considerably. We wanted to know how…

You write in your book that the limiting factor on our performance is not physical or mechanical, but pyschological. Do you mean by that that mental barriers prevent us from unravelling our full potential?

That’s a fair summary of what I wrote in Endure, but it’s maybe worth clarifying what I mean. To say that the limits are psychological doesn’t mean there are no physical or mechanical constraints and you can just “decide” to do whatever you want! It’s more subtle than that.

Imagine you’re running a 10K race. Is there any point during the race where, if someone pointed a gun at your head, you wouldn’t be able to accelerate? Maybe very close to the finish, but otherwise you’re always pacing yourself. If so, what is the physical or mechanical “limit” that’s holding you back during the first 9.9K? If often feels like you can’t go faster, but that’s because you know from experience that you shouldn’t go too fast early in a 10K or you’ll pay the price. So when you put it that way, I think pretty much everyone would agree that the limits to endurance are in some sense psychological. Who among us can really claim that their race execution was so perfect that they were right at the limit of their sustainable pace for every metre of the race?

Whether our body’s “full potential” really is a lot greater than we know is another tough question, but we’ll get into that below!

What exactly is the process in our brains tricking us into thinking we can’t go faster and how did you find out about this?

Nobody really knows the final answers at this point, but in the 1990s a scientist named Tim Noakes proposed that our brains act as what he called a “central governor” that prevents us from pushing to our true physical limits, presumably to protect us from serious damage. Since then there has been lots of scientific debate over how and why this might happen, and whether it’s really true.

The current theory that I find most convincing is that we’re guided by our subjective perception of effort. All the physiological signals we hear about—core temperature, lactate levels, heart rate, and so on—contribute to our general sense of how much effort it takes to continue. When that effort level gets too high relative to what we think we can sustain to the finish, we slow down. This is why on a hot day, we slow down very early in the race, long before we’re actually overheating: we’re responding not to the actual temperature, but to the perception of effort that is affected by the temperature. 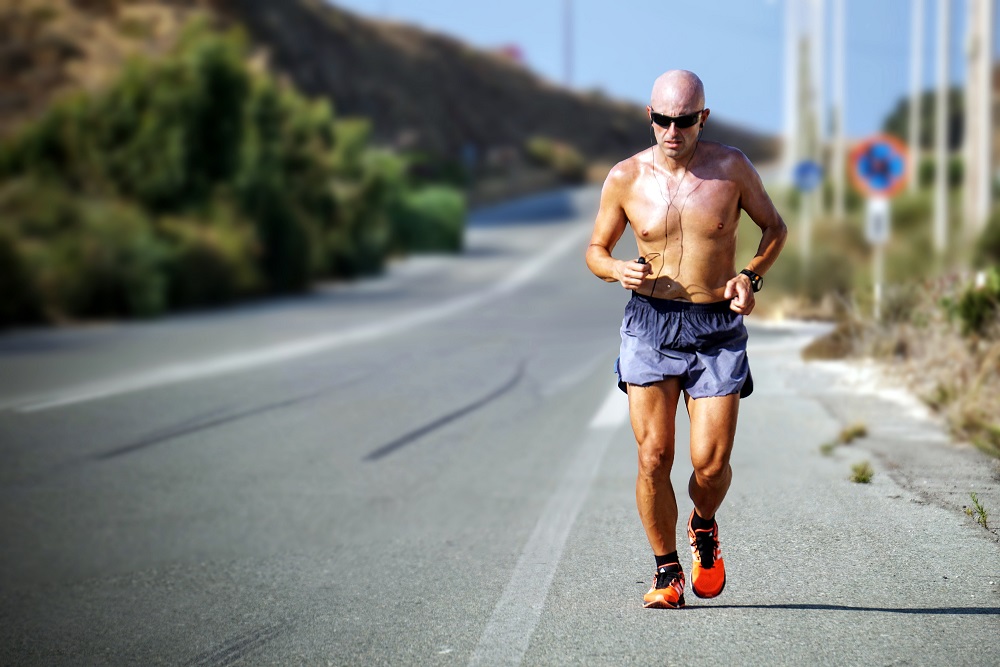 How can we try and counteract this and learn where our actual limits are?

I think the question of “actual limits” will always remain hypothetical. There’s no such thing as the perfect race. So it’s more a question of learning to fight against our brain’s desire to slow down, so that we can get a little bit closer to a goal that we’ll never reach.

To some extent, I think just knowing the role of the brain in setting our apparent limits can help. In the middle of a race, if you feel that you’re slowing down, you might blame this on elevated lactate levels or something. If that’s what you think, then there’s nothing you can do but accept the slowdown, because it’s an unavoidable physical truth. But if you believe that you’re slowing down because the elevated lactate levels are making the race feel harder, then maybe this helps encourage you to keep fighting.

More generally, I think the type of positive mindset exhibited by runners like Eliud Kipchoge can make a difference, helping to alter your perception of effort. There’s been some fascinating research demonstrating this over the last few years.

So, are you saying that we can somehow “battle” the lactic acid?

You can’t use your mind to change your lactate levels. But perhaps you can change how you respond to those lactate levels. The thing to remember is that during a race or workout, we’re almost never running at a true “10 out of 10” effort. It would be physically impossible to run like that all time. Instead, we’re always trying to sustain a lower effort that gradually increases so we only hit 10 at the end of the race.

Maybe you’re at 8 halfway through the race, and then rising lactate levels make it feel more like 8.5. But maybe that subjective assessment of 8.5 is partly because you haven’t done a lot of anaerobic training this season, so it’s an unfamiliar sensation and you’re overreacting to how it feels. If you’re able to mentally reframe that feeling of lactate in the legs, perhaps your subjective assessment of effort goes back down to 8.3, and you’re able to sustain a slightly quicker pace to the finish.

Of course, no one actually calculates these numbers midrace! I’m just trying to illustrate what sort of calculations you’re constantly making, without even being aware of it, when you race. 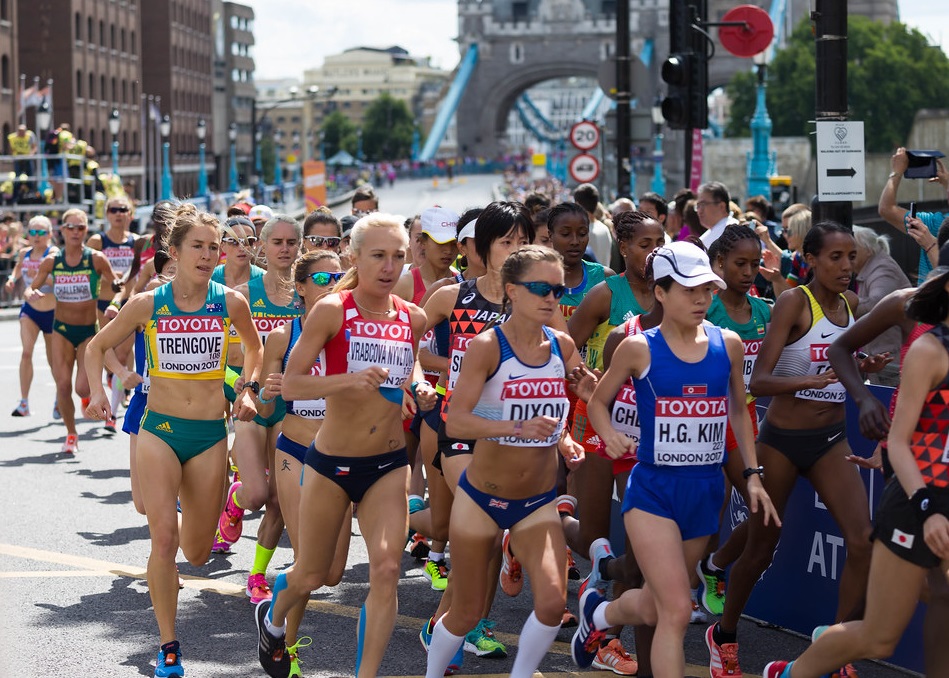 How big an effect do you think it has on the performance of people if they get rid of those mental limits? For example, how much faster do you think the marathon World record could be in the future?

To be honest, I suspect the potential improvements are biggest for recreational athletes, and smallest for elite world-class athletes. One of the traits that enables an athlete to reach the top is the ability to push through discomfort. That said, I do think that even the best athletes can sometimes reach another level. When Eliud Kipchoge ran his 2:01:39 world record last year, I think that performance was partly enabled by the confidence he got from running 2:00:25 under artificial conditions at the Breaking2 race the year before. It changed his perception of what was possible, freeing him up to be aggressive in the second half of the world-record race.

Although professional sports people have experience in trying to get as close to their limit as possible, they still have to learn and relearn every season. There’s some great data showing pain tolerance increases in elite swimmers over the course of a season, maxing out as they approach their goal race. It takes constant practice to suffer well.

Does it work only for endurance sports or also for others?

As a rule of thumb, I’d say the longer the event, the greater the role of the mind. But there are some great experiments showing that mental factors do a play a role even in short bursts of activity. There was one famous study from the 1960s where researchers snuck up behind their subjects and fired a starter’s pistol in their ear right before they did a maximal lift. The fear boosted their strength by 7 or 8 percent!

We hope that some of the thinks Alex mentioned here will also help you to improve your performance in the future!

“The difference only is thinking. You think it’s impossible. I think it’s possible.” – Eliud Kipchoge before he ran his World record in Berlin

Alex Hutchinson is a science journalist who specialises in writing about endurance sports for Outside Magazine and other publications, and he is the author of the New York Times bestseller Endure. In his own running career, Alex ran for the Canadian national team as middle-distance and cross-country runner. His best times were 3:42 (1500m), 8:00 (3000m), and 13:52 (5000m). These days, Alex still runs most days and competes occasionally in road and cross-country races.