Sondre Nordstad Moen. This name is widely known since the Fukuoka marathon in December 2017, where Sondre came to be the first Non-African man to ever have run a marathon below 2:06 (in 2:05:48). But how does this guy train and what is his story? In this interview, the Norwegian athlete gave us some interesting insights.

Sondre, such success does only come with great dedication and innumerous hours of training. Do you have time to work or study beside your training?

After I finished high school in 2011 I started focusing only on my running career. In 2012/2013 I had a foot injury and wasn’t able to run for 18 months. During the rehabilitation for my operated foot I started working part time (50%) in the only shop specialised on runners in Norway, with which I continued until after the Olympics in Rio 2016. Since then I have been fully professional athlete. 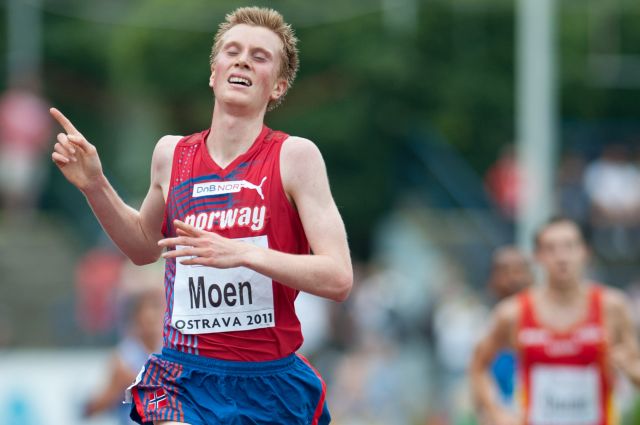 Sondre Nordstad Moen on his way to a victory in the European Athletics U23 Championships over 10000m in a time of 28:41,66. (Picture: oasport.it)

You said that you started focussing on your running career after high school. Did you ever try out other sports or has it always been running?

Throughout that autumn I was thinking a lot about what I wanted to choose – skiing or running. After the European cross country Championships, I felt that I had a lot of potential to improve and do well in running. I wanted a real challenge and so I decided to focus on running. However, distance running at the highest level is very un-Norwegian in my hometown (Sondre comes from Trondheim, where cross-country skiing is clearly the dominant sport). So, I knew that, if I wanted to train at the highest level, this would mean training mostly alone.

How much do you train? In Switzerland, Norwegians have the reputation to train lots of hours. Is that true in your case?

I guess this is more the case for cross-country skiing than for distance running. When I focused on skiing, I counted hours per week. Between the age of 13 and 16 I trained between 10 and 15 hours per week but not only running and very rarely all-out. I think I have always made sure that I have the quantity to support the quality. After many years of training it becomes more important to focus on the quality, because there is a limit to how much training at low intensity you can benefit from. Since 2014, I have been training about 700 hours per year in average.

What does a “normal” training week look like for you?

In average, I run about 200-220km per week, which I reduce by about 20% before competitions. The training consists of the following elements:

What do you do between trainings?

Between trainings I primarily rest or sleep. But I also read books (preferably Norwegian crimes), I listen to pop music (hard to choose one favourite) or I drink coffee.

You first competed in 5000m and 10000m, now you are the European record holder in Marathon. When did you start specialising more on marathon?

I am still combining running on the track and running the marathon. I feel it is important to maintain or improve my speed on the track in order to have a good starting point for every build up for the marathon. If you want to run 2:03 in the marathon, you need to be able to run close to 27 minutes for the 10k. My first marathon preparation was before my debut in 2015, although I have always been doing high milage as a track runner. I remember I was doing fast long runs up to 35km already when I was 19. So, running fast over long distances has always been part of my training. My former coached told me when I was seventeen years old that marathon was going to be my future. 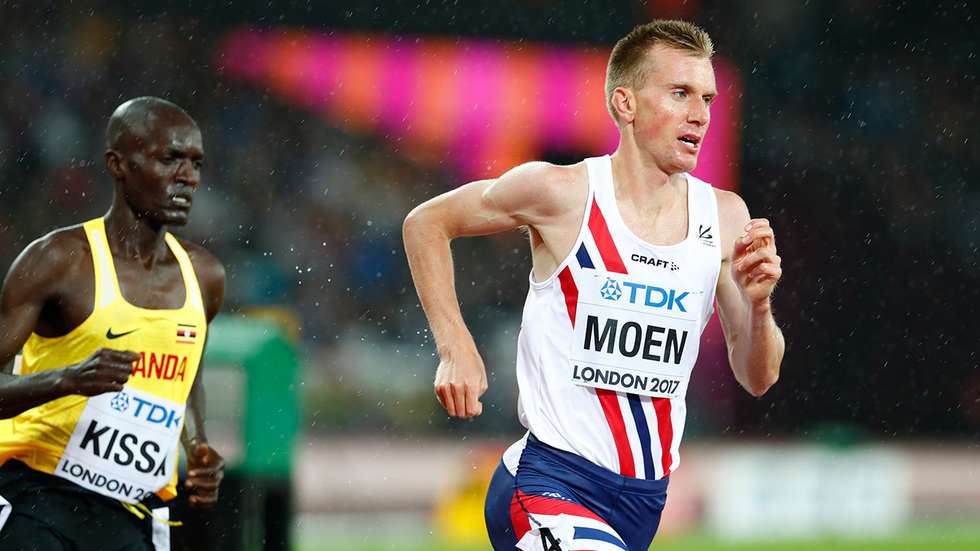 Nordstad Moen in the 5000m race at the World Championships in Athletics in London 2017 (Picture: rbnett.no)

What are the main differences between training for 5000-10000m and for a marathon?

The main difference is the extension of the marathon specific endurance, with the idea to get the marathon pace as close as possible to the lactate threshold. Before and after specific workouts, I use to have one or two days of easy training. In between marathon specific sessions I try to maintain a good level of basic speed for the track. So, I do shorter stuff on the track as well, but less frequently. The total volume of kilometres per week has increased by 15-20%, as compared to when I was only training for 5000m/10 000.

Is it true that you measure your lactic acid in every training?

In the very first years of my running career I used to measure my lactate levels in workouts, especially in the beginning of the build-up during the winter training. Gradually, however, I realised that listening to the feeling of the body and orienting to the planned running race pace for the event I was preparing for was even more useful.

Do you measure and document your heart rate values and if so, only during training or also in everyday life?

I used to train with heart rate monitors when I was still doing cross-country skiing and also during my first years as a runner. It is common to train according to the heart rate in most endurance sports in Norway. After a while I felt that I could understand my body and its signals more and more. So, I don’t need to look at the display anymore to know which intensity I am in.

I have never been regularly measuring my resting heart rate because it is affected by so many factors. I measured my lowest resting heart rates when I was injured and did very little training. So, the shape was very bad! It is therefore not a very good way to measure how good your shape is. When you start to understand your own body, you can also feel yourself when it is time to recover or if something is wrong. In my opinion, and concerning my own experience, there is no need to measure the heart rate.

We have heard that, in order for the average pace of your training not to be affected, you don’t start your trainings in uphills, but you rather walk up and start on the flat. Is that true?

These are rumors! The reason why I prefer to start my runs on flat surfaces for the first couple of kilometres is to allow for my stiff calves and tendons to warm up properly before I increase the pace. This is especially critical in high altitude where the lack of oxygen makes it more difficult to start your training within the borders for your aerobic zone.

You mentioned before that being a long-distance runner in your hometown meant mainly training alone. What does it look like today? Do you mainly train alone?

I spend a lot of time in Kenya. When I am there, I train with other athletes who are trained by my coach Renato Canova. I am alternating between training with track runners and marathon runners, depending on what I need in my training (speed vs. endurance). I prefer to do my daily long runs alone, so that the feeling for my own body and its state is not disturbed. When I am in Europe, I normally do all of my training alone because I follow an individualised plan prepared by my coach, which is always adapted to my development. 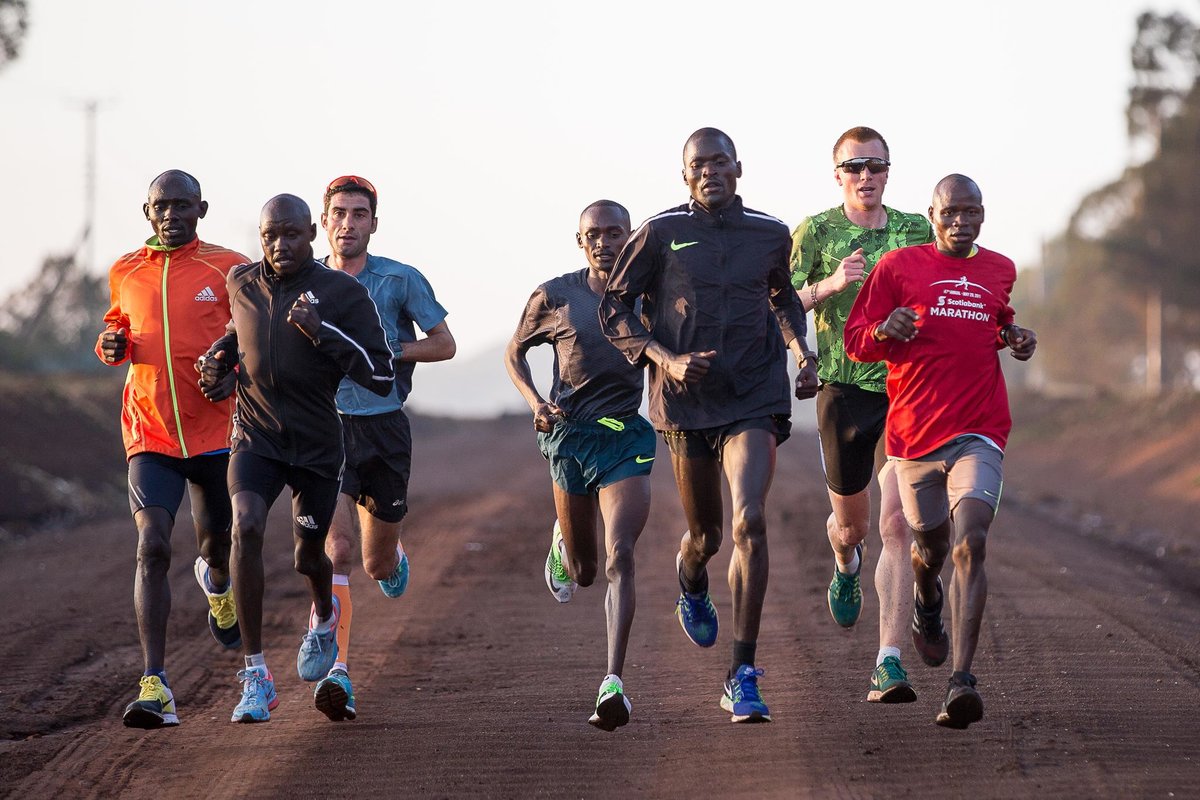 How do you explain that you ran a marathon faster than any other European runner has done before you? What makes you better than the others?

This is a difficult question and, honestly speaking, I don’t know in details what other athletes do. What I can see, is that I’m dedicated and that I have a professional approach to the discipline.

Also, as long as I know, none of the best European marathon runners in history, did not spend more than 250 days per year to train at high altitude “only”.

Do you ever feel like not training or are you always motivated?

Of course, I have days (especially in intense and heavy training periods) where I wake up in the morning and know it is going to be a hard day and tough to complete the planned training, but I always remind myself of why I started my running career- because I found it interesting and rewarding to see how far I am able to push my body and to see how far I can reach. What I have experienced with myself is that it is only with the sessions and the periods where I feel a much deeper pain, stress and discomfort from the training I am pushing myself through, that changes, improvements or approaches occur in my body or mind. You never know your own limits before you go and explore them! For doing this, you need to meet the following three criteria: 1) you have to free your mind, 2) you have to believe in the training you are doing, and 3) you need to make sure that you recover from workload in time, in order not to get too exhausted.

Distance runners often try to optimise every single detail, including nutrition. Do you follow a special diet?

No special diet. I eat to fuel my daily training and to recover from it. The one thing I am careful about is to choose food which is easily digestible before training.

Considering the large amounts of training, injuries would not be a surprise. Have you had a lot of injury problems?

So far, I have only had one serious injury in my career. In the end of 2012, I teared the flexor hallucis longus tendon (main tendon to the big toe) after one year suffering with tendinitis in the same tendon. This kept me away from running most of 2012 and 2013. In March and May 2013 I had two surgeries and I was back running in November the same year.

Runners often dedicate everything to their sport. Do you ever feel that there are things you cannot do because of your sports career that you would have liked to do? If so, what?

At the moment, no. I have always found it easy to be dedicated to my activity in sports because I have always wanted to see and experience my own potential. Professional sport is something you do for just a small part of your life. I am sure the day to start doing other things will come the day I feel I do not have any more to give.

What are your next big goals?

My next big goals are to battle for a medal at the 10 000m in European Championships in Berlin this August and a fast marathon time in the end of the year.

This blog entry was edited by: Marion Aebi