We introduced him, Frank Shorter, back in our series: running legends. The running legend can look back on extraordinary achievements, which were the result of a special training philosophy. His knowledge is now also finding its way into running.COACH: Frank Shorter, the Olympic champion in marathon 1972 in Munich, is our new ambassador – we are proud and happy.

Frank Shorter was the dominating marathon runner of the 1970ies. In 1972, he won the marathon at the Olympic Games in Munich. And how: already during the first half of the race he ran away from the field. In the finish, his lead amounted to more than two minutes. Four years later, at the Olympic Games in Montréal, we won the silver medal. Between 1971 and 1974, Shorter even succeded in winning the at that time very prestigeous Fukuoka marathon in Japan four times in a row.

With his Olympic victory, Shorter achieved not only a win in sports, but he also ran into the consciousness of American public (the Olympic marathon was broadcasted live on US TV), thereby making the running sport popular for the general public. His achievements, especially the triumph at the Olympic Games in Munich, contributed considerably to the beginning of a running boom in the US.

Firstly: It was incredibly successful. Out of the 15 marathons he ran, he won ten. A fourth place, aside from one dropout, was is worst result. Shorter achieved these results between 1971 and 1976. That is, he was at the very top in marathon for six years. He managed to stay at the top for such a long time, because he was good at peaking his shape for the important competitions. He finds it practically impossible to be in the best shape possible two times in one season, he says. Therefore, he only ran a few main competitions per year and he used to try and be in his best possible shape at the Fukuoka marathon and at the Olympic Games.

Secondly: Shorter was no top athlete during school days. It was not until the end of his university career that he started to train seriously ant to achieve good results.

What do we learn from Frank Shorter?

Out of these three aspects, every amateur runner can learn a lot. Firstly, it is worth focussing on a few main competitions a year. This expecially applies for longer distances; training and preparatory competitions are of course always possible. Secondly, it is not necessary to be a top athlete already in younger years. For longer distances, structured training can give great result even at a later stage. Thirdly, fast legs in shorter distances lead to better performances over longer distances. This explains the importance of rapidity and interval training.

Good to know that the knowledge of a running legend like Frank Shorter is inherent in the running.COACH training plan. 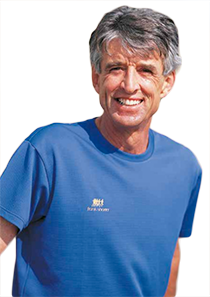 “The training philosophy that made it possible to become olympic champion is at the heart of running.COACH. As we developed plans for everybody, running.COACH suits every level: From the beginner to the absolute competitive athlete.”