Recreational sports contribute positively to quality of life and health. But what are the advantages? Are there any disadvantages? What prompts a person to run? We will find out while analyzing a scientific article.

In this blog article, we will address the issue of long-distance running in the context of the general desire for a healthy lifestyle. In the public perception, running is portrayed as a health-promoting activity – more so than any other sport. Since the 1970s, running as a leisure activity has become increasingly important and popular, and the number of amateur runners has been growing year by year.

A major influence is undoubtedly the countless marathons and international running events that are organized in many major cities. The image that running conveys is one of a sport that also contributes to the achievement of “health and well-being” objectives, such as the fight against obesity, the increase of leisure activities and the pursuit of improved physical and mental health. “Running has become an almost spiritual, sensual, and poetic experience that can improve the participant’s quality of life” (Bale, Landscapes of Modern Sport, 1994).

The scientific study on which our article is based aims to understand the experiences of a group of “active leisure participants” (in our case, long-distance runners) and to analyze the advantages / disadvantages that these experiences have brought in relation to the concepts of health and well-being. One of the key concepts that emerged from the research is the following: The main reason people choose running as a recreational activity is the desire to strive for a healthy lifestyle. From this finding, the study derived four main sub-themes, which we will analyze below. 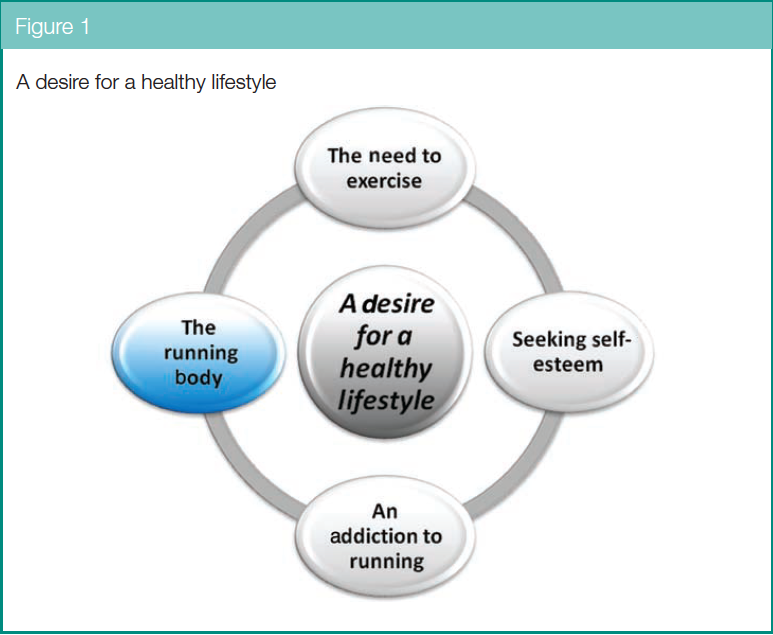 The desire to exercise

The first theme is the desire to exercise and move on a daily basis. Many runners feel an intrinsic need to engage in this sport and the reasons are many:

Thus, the healthy lifestyle sought relates to both mental and physical health.

The addiction to running

While we listed a long list of benefits of running in the previous section, this second subtopic highlights a negative impact that running has on some participants: addiction. Yet the feelings that result from this addiction can also be positive. For example, dedication, the will to overcome a challenge, the possibility of forgetting life’s problems, or exercise as an antidepressant.

It is up to the runner to recognize where the limit is and at what point the sport becomes an obsession with almost self-destructive consequences. The compulsive exercise is done by some people for similar reasons (e.g. coping with everyday stress) as others turn to alcohol or drugs! Here is a list of possible negative consequences of obsessive sports.

So these pitfalls for too much exercise exist in some runners. But excessive exercising is an exception, despite the many trigger points. By the way, a personalized training plan like running.COACH can help to keep training under control and avoid overtraining. In any case, it is important to remember the following: recovery is just as important as the training itself!

A third effect that running has on participants is an increase in self-esteem. The benefits of this sport for our mental health are obvious: in the interviews, a feeling of pure joy and euphoria was repeatedly evident, which is typical after exercising. These emotions help to eliminate negative feelings and at the same time provide the necessary strength and energy to cope with the complex situations of everyday life. In particular, self-awareness plays an important role: the stamina and concentration shown during running can be transferred to real life, namely to the way we deal with problems. It can serve as an additional mental boost when you feel sad, tired, or not up to a task.

Incidentally, the “natural high” that sometimes occurs during running is called a “runner’s high,” a psycho-physical state characterized by relaxation, euphoria, and a sense of well-being, and triggered by the release of endorphins (associated with areas of the brain related to emotions). In practice, the body “intoxicates” itself with the drugs it produces.

Finally, let’s come to the last subtopic, which is closely related to the society in which we live. Especially in the Western world, external appearance plays a central role. For many runners, the reason for running is the attractiveness / appreciation of their body. It is even referred to as a “body project” (Shilling, The Body and Social Theory, 2003) in the sense that a person decides to start running in order to reshape their body and individual identity through “management” and “maintenance”. Functionality and aesthetics are connected, and this is the most important aspect for many runners.

It is not only about the value that the sport conveys, but also about the symbolic value it embodies. The slim body stands in stark contrast to the sedentary society we live in today. This creates the image of a healthy, disciplined, culturally and economically engaged person.

This scientific study has revealed some interesting concepts: regularly practiced physical activity (in this case, running) holds great potential. Not only can the benefits that running itself brings to the body and mind be reaped. Running also promotes social values such as psychological well-being, healthy aging and the reduction of obesity.

With this in mind: Keep on Running!