Gabriel Lombriser is the Swiss National Trailrunning Coach, a coach in a track and field club, personally coaches several athletes, is Product Manager at running.COACH, organizes running programs with his company “Indurance” and lives a life for running in general. The conversation is about his running career and his love for running.

After about 15 minutes, Gabriel Lombriser gets a little uncomfortable. “Didn’t we already publish a blog post about me?” he asks, and it becomes clear that he doesn’t really like to talk about himself and his own career – although many other athletes with a much shorter résumé do so often and with pleasure. For example, he was the first to win the Swiss multisport event “Gigathlon” in all three disciplines (“Single”, “Couple” and “Team of 5”). He also made a name for himself in the running scene first as a good mountain and trail runner and then as one of Switzerland’s leading trail running experts.

He is far more comfortable talking about the beauty of running and endurance sports in nature and the social aspect of it. Sure, he says, runners have individual goals, but in the end there’s still no one who can achieve them all on their own. At least he knows of no one who does everything alone and is successful at it. In addition to talent and training, the environment, i.e. friends, family and coaches, is another extremely important factor for success.

This conviction is no coincidence, as Gabriel Lombriser’s career is a perfect illustration of how important the social environment can be for a sports career and, consequently, for personal development. At the age of 10 he had his first taste of track and field, but soon switched to ice hockey because the track and field club was too focused on sprinting.

When, during the breaks, breathing suddenly took place with cigarette drags and carboloading in fermented form, it was no longer his world.

He remained faithful to field hockey until the jump to the second team, which he had to take early due to a lack of a junior team. When in the period breaks breathing suddenly took place with cigarette drags and carboloading in fermented form, it was no longer his world and he closed the chapter of team sports.

He found his way back to endurance sports through a friend from the neighboring village, whom he met at a regional bike race.Through his network, he found his way back into the running scene. “If I had been on my own, I wouldn’t have found it so cool. The social environment is extremely important in a situation like this,” says Lombriser, adding, “If kids and teens don’t have a group they feel comfortable in, they’ll quit all together.”

Parallel to his apprenticeship in Basel, he subsequently trained in the track and field club and also became increasingly active in orienteering. But it was another type of athlete that really made an impression on Lombriser: the multisport athletes. He observed with great interest the participants of the Gigathlon, which was launched in 1998, and their abilities in the various endurance sports.

He himself embarked on the path to becoming a multisport athlete in his own unique way during his university internship in the USA: by befriending someone in the fitness center, arranging to go mountain biking together, and only a short time later allowing himself to be thrown into the metaphorically “cold water” of swimming training. According to Lombriser himself, he really hadn’t been much of a swimmer up to that point.

The love of running 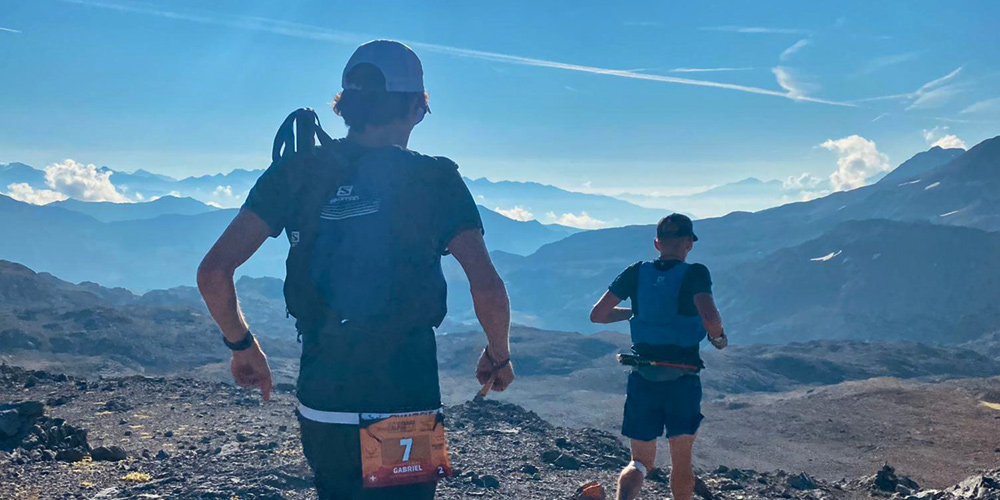 With the victory at the Gigathlon 2017, he had reached his multisport pinnacle and his name was now part of the list on which his former idols had lined up. Subsequently, an interesting trend can be seen: The shift from multisport back to running, or more specifically, trail running. He asks and answers the pertinent question regarding this shift:

“Why is running, and especially trail running, the best sport?

Because it is so primitive! I used to play ice hockey and later I did triathlon and gigathlon… All cool, but running is so simple: Reduced to the Minimum! A pair of shoes, a hydration pack, a good plan or map and off we go into the next adventure! Climbing mountains and soaring over trails, all with your own strength!”

The fact that running is close to his heart is not only evident from his training diary. Gabriel is Product Manager at running.COACH, runs together with his wife and trail runner Judith Wyder the company “Indurance”, which specializes in the organization of trail running clinics. He is also a running coach at a track and field club, coach of the national trail running team and also personally coaches top athletes. These are all activities that have to do with teaching the sport of running to other people.

There are several areas that are important to him in teaching the sport. On the one hand, there is the scientific aspect of training theory, which he is able to practice above all as Product Manager at running.COACH. In his work at Swiss Running, he would also like to be able to influence structures and thus create the best conditions for younger trail runners and facilitate their access to the sport.

“I prefer to do things in a group rather than alone and that’s also why I want to work with people. Running alone across the Alps is much less fun than doing it as a team. Runners are sometimes called loners. Personally, I experience every day that it is mainly the social aspect that brings people to running.”

In addition to his love of running, the scientific approach and the social contacts, he is also strongly involved in various charitable areas because he feels that the volunteer work in clubs is extremely important. People needed this support, otherwise a lot of strain would be put on other resources, which in turn would cost society a lot more. For him personally, endurance sports mean an enormous gain in quality of life, which he is happy to pass on to others.

He ends the conversation by saying that he is now looking forward to his vacations in Sardinia. Upon further inquiry, it turns out that the “vacation” is a week of running in Sardinia, during which he will introduce a running group to the local trails.

1 reply on ““Why is running, and especially trail running the best sport? – Because it is so primitive!””

Always a pleasure to run with you!!!